The mortal crew have dealt with a serial killer ghost, had a bit of personal rest, and sought out the Grand Tournament of the Changeling.

Of Ghosts and Murder​

One of the highlights in the past few days has been the Zombie Ranch Killer. The killer has had a few different names, and with DA Preston Locke and Detective Jimenez, the group learns this is a murder mystery in the works over a series of years. Delving into the details, the deaths all stem from couples and ever increasing violence. Searching through notes and videos, they realize a delivery man has a cursed item. What could this mean?

Through discussions, video review, deep thinking, they believe this item may be tied to something cursed by a vengeful spirit...or ghost. Turning to the aid and insights of a medium provided by Bugsey, the group gains specific details and a location. A coin turned into a bracelet carries the angry ghost of a ranchhand from Civil War era Texas. Wronged by a lover, he has sought to kill her and her new lover many times over.

Using this knowledge, a lead pot, and a two-prong attack, the crew corners the man, removes the item, and end the crisis. Alas, the world will not know the truth, but further crimes will not occur. Preston will work to some solution, but seems overwhelmed by the ghost and situation.

A few members attended a convention presentation on a Red Giant star emitting strange waves, moving oddly against the rules of science, with a projected trajectory to earth over untold eons. Various folk attend, new and known, taking notes and deeply discussing the situation. So strange?

But for some in the group, especially Donovan, it matches some recent research of portents.

Other strange tidings come for the crew...

What else could happen!?

Welcome to the Grand Tournament!​

This week welcomes the Grand Tournament of the Phoenix for the Kingdom of the Burning Sands. Friends, enemies, and allies all come to the markets and arena to witness a wonderous world of the fair folk. Champions will be marked with the baroness' favor. And a grand ball and feast will be held. 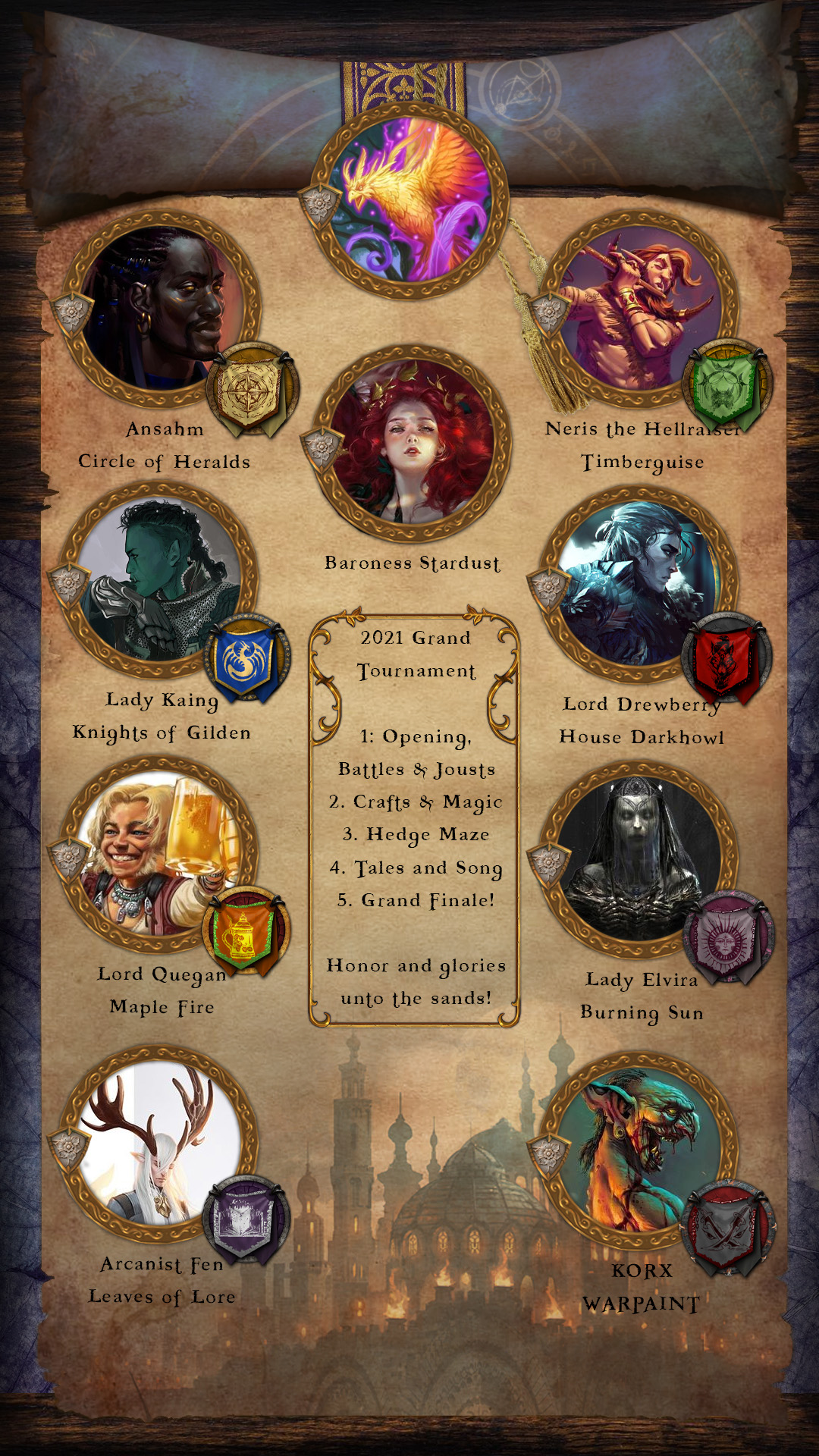 To Walk in Twilight​ 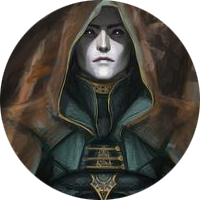 Never had Preston so yearned to remain in the office, beg off from ceremony for the calm order of files in a box, reports filled in forms, the painstaking work of reading typed words giving bland details of brutality. Far better the demands of the county, mayor, and police than the eyes and judgement of Baroness, Knight Regent, and assembled kith and kin.

Yet this could not be denied, the truth of soul beget the falsehood of modern flesh. Doors led to halls, halls to the assembly, and in its passing of light and dark over his shoulders and head, did Preston become. For truth among the fair ones laid in their memories and souls. And such strong memories burned since his dance.

Preston's human guise fell away in the knight's hall, the elegant suit disrobed and set upon hook in his solitary area of shadow at the edge. Far removed from the rabble, yet not forgotten. A trophy of past battles. A promise to uphold between warring factions. All of them fools. His blade and wit belonged to she that turned pale cheek to his advance, and he the scorched earth she received when finally realizing the boon lost in rejection.

Blazer and vest, cotton shirt, slacks, all set aside as the pale flesh nigh colorless among the trolls of this trod revealed. Opening a trunk of eldenwood, no light could pierce the deep shadows within. Layers of woven leather pulled free and wrapped around every limb. With flex of arm and leg, it clasped tightly, releasing with a flick of need. A length of belt wrapped around, slithering as a snake. Thin lengths of silk inlaid leather wrapped in crissed crosses along forearm and calf. Feet silenced. Fingers limber. And into every seam and edge, did he slide shivs, blades, dirks, and a single token nearest his heart.

Something olde... A ring of silver gilt with a carnellian cracked and symbol faded slipped on ring finger.

Something new... A single silver bullet carved with a D, such a jest but one they shared as Drewberry carried one with a G.

Something borrowed... He clipped a small charm from one ear stud, indeed borrowed from one of the newly made friends, of a small crow head with stylized roses in the eyes.

Something blue... A small pressed flower plucked from another newly made friend's flower crown joined the token.

A sixpence in your shoe... An old coin marked by lock, key, and moon, spat and bled on, that he found in his hand when the dance ended was tucked in the leather of his left leg.

"Fennóg liath na gragarnaith..." He whispered as the ears elongated, skin took on hues of heavy cream, eyes deepened to moss green pools with silver pinpoints of light caught in them, voice became a breath of sound. His mein fully laid as a mantle as the cloak of silver grey leaves graced his shoulders.

"So do I handfast to the blade." Right hand held out, he twisted wrist, the fingers clutched to grey metal bound in dark leather.

"So do I accept the path between." His left hand held out to match the right, palm up as a thin chain nearly transluscent wrapped around wrist and across to hang from the blade.

He pulled hard between, yet it did not snap, only strengthened. What breath held released as his soul was not forfeit in her eyes.

A heavy hand scarred from swordwork and long toil at the forge fell on his shoulder. Magda Brindlespire peered over and leaned to the slight man's back, her long indigo braids swaying with a slap near his spine. "Ah so ready finally, friend? I wouldn't want to miss the opening ceremony. You took damned long enough."

Preston...no...The Greywarden peered forward without turning, eyes blazing on the blade and chain before tucking them both away. "I shall not tarry further then, Brindlespire. Lest you force more drink in me than the whole of the desert could drink."

The woman laughed with the brashness of her knighted folk, trolls knew nothing of subtly, else woe the world. Though this one did try unlike the others. Bastards tended to take to their own like, folk finding folk, as she always said.

Perhaps this tourney would not fall so painfully as he feared. Turning in small steps so light to be those of mice, he followed the towering knight, the last to leave, always as was his way and demand in an order not born to. Yet as the light beyond picked out the details of his armor, the Greywarden knew such a hope had dashed the moment he met the Key.