A diverse array of people live and work within the city in various levels of power and influence.

Many of the positions and names are campaign creations beyond the Exalted books. Feel free to use this information for your own campaigns.

The ranks of the noble lead the city in laws, commerce, and justice. The following positions are listed from the top power to the lowest level.

Residing over the city of spires is the Tri-Khan. When first rising to take power ages past, the Delzahn selected and sent one from their number to the position. A balance of nomadic life and civilization of the city remained in the control of the Dalzahn.

In private, Tamuz has joined the Delzahn with a new face, claiming the position of Tri-Khan age after age. His current face is Yejouj Kahn, one of the more cunning descendants of the original Thri-Kahn Tamas Kahn, a man who was known for his cunning. His reign has held far longer than ever before, a mortal with glowing eyes holding court for over three hundred years.

While the Delzahn hold concerns and superstitions, the people of Chiaroscuro love and adore their leader, from beggar to noble. Other nations seek his advice and support, rarely seeing the region as a threat, far more as an ally or resource.

Ancient family lines with expansive wealth and influence in the city, the Bey hold the highest position under the Tri-Khan. Some can trace their bloodlines to the First Age. Other families in this eschelon were fully destroyed in the Ursurpation.

This house is the military leadership for Chiaroscuro. Every member serves in some branch of defense or offense in the city. Members have joined the cavalry, armies, naval fleets, firewand gunneries, weapon masters, security, city guard, and the like.

This house is steeped in intrigue, politics, lurxury trade, and wealth. All of the best parties are planned and run by the Songhai. Drama is the currency of their children and elders.

The house has tracked, planned, and designed the architecture of Chiaroscuro since the first bones of the city were laid, at least that is the tale. All members tend to place work above everything, spending time in the palace of the Tri-Khan, in organizations preparing for construction, and in-house designing.

The Orkahns tend to be city-bred Delzahn, charged with major areas of services and commerce in the city.

A force of power with a tumultuous past and uncertain future, Duat has hailed through greatness and disgrace in the ever shifting wheel of fortune. They once held a position as artificers and textiles, bringing beauty to the city and families through fixtures in homes and gorgeous garments. Parties lit with their beautiful lights, gleaming over the metal woven fabrics of dancers and politicos. They set the trends in many gatherings and parties, envious of any that sought to outshine them.

It was this envy that twisted their heart. The patriarch On’sul damned them all by seeking to trap some spirits of Grandmother Bright into his creations, earning imprisonment within gold and metal. His children and descendants have sought to pay for this crime, earning freedom in some generations, until the anger and need to rise again sends members spiraling to diabolical acts. They are known to wear golden masks, in homage to On’sul who still remains enslaved as a golden statue to Grandmother Bright.

A few through the years have sworn this could not be the true reason for their fall and curse! But seeking the truth could bring their attention, or that of the oldest spirit in the city. 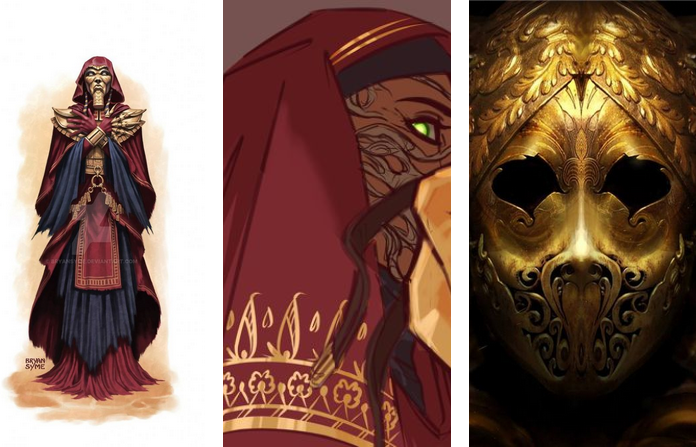 Visionaries of the inward path and voice of the great ancestors, House Soratt has provided the royal court and Orkahns many seers and advisors. Through the centuries, they have ever guided the people of Chiaroscuro to a brighter purpose. They earned their place through careful planning and humble insights as the Tri-Khan face an uncertain time during the Age of Dreams. The Exalted of heaven fought terrors untold, leaving much of the city to take care against the turbulent seas and ever hungry sands.

Despite the dangers faced, Soratt held to listening to the past for a blessed future. It’s strange for a house to have such a long history devoid of crimes or shadows. What lies in their past and histories that may be an embarrassment has remained hidden, requiring serious research or infiltration to learn more. 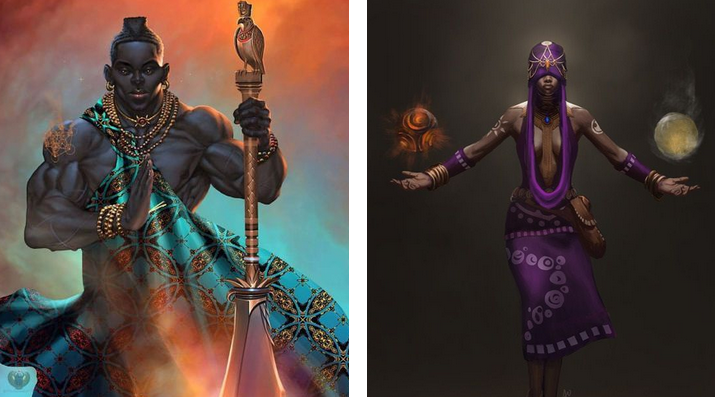 A caste hearkening to old Del’zahn heritage, house Il’Yeir retains a tight grasp on desert traditions and folk legends of the Shining Sands. They speak for the great tribes and families in the deep desert, once great supporters of the Tri-Khan. Now they hold him in contempt, bringing forth the demands of their breathren, working to keep the beating heart of the city in tune with the wild truths.

A few in their lines understand losing this knowledge and tradition of their roots is a danger, threatening them all to fall to the exalts as they awaken and return. Some fear they may rise up and allow the tribes into the city, burning all of civilization. Others hold concern they may destroy any that show a touch of exaltation. While many believe they are the last protection against the rising Realm. 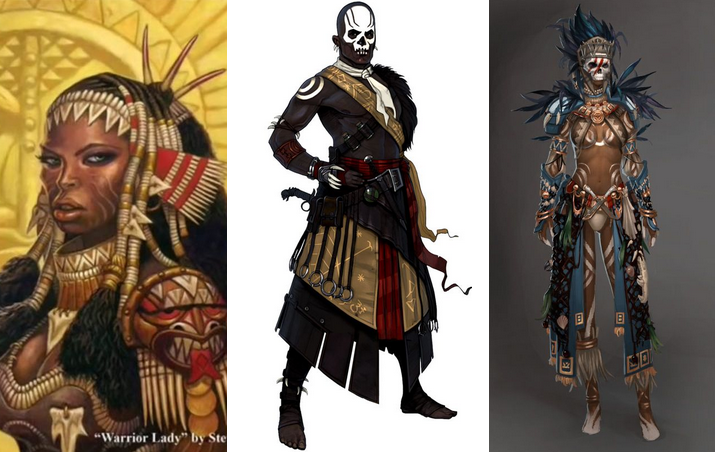 Love, life, and a great love of the fantastic beasts has kept House Peur ever in the graces of the Tri-Khan. They hold a steadfast position of the Orkhans with great influence through their beautiful creatures. While a newer line to rise among the families, they have many who hold genuine adoration of their children and way of life. They began with a few of the families wise in the way of caring for beasts, aiding with medicines and welfare of beasts, delving into cross-breeding.

Members of their families have joined many other houses, especially the Orkahns, to care for the beasts so loved by the Southern gods and Tri-Khan. They have numerous children, a literal army of families and offspring that could lay waste to enemies if they wished. But living well is all they have want of this life.

The house is consumed with criminal work and gaining power. They have an equal number of clean faces, supporting orphanages and community works. While the rest command smuggling, collect and train thieves, and engage in fences.

Control and power lies in imports and exports according to this house. THese specialize in caravans, funding and connecting with numerous outfits that travel across the south. Rarely do they have clear insight to the breadth of their deals and businesses, so many are connected to their network.

Once a house of great standing, within the past two centuries Ubriani has fallen far. With a rising star, they engaged in diabolical acts attempting to displace a series of houses to rise from Pasha into another rank. Marriages, murders, information brokering, blackmail, it seemed they were on a terrifying path. Members within the house learned of the great conspiracies and turned them in to the Tri-Khan. Tribunals ferreted out the worst members, but the trust was broken. Now they are a broken old family with few resources.

Truth to the House

While the initial tales of their dark dealings have a seed of truth, the rest is fabricated. The house is the elite spycraft arm working directly for the Tri-Khan.

A keep rounded by a wall of grey stone, the Sijan Brotherhood holds land as an embassy for the dead and the great city in the east. They welcome those in mourning, needing to understand the ending of life and the promise of a second breath in the Shadowlands. Not many come to them among the people, but those that do find great understanding.

Many of the shamanic faith disdain their practices, while other faithful welcome their advice and insights. Grandmother Bright works with their membership to best maintain crypts, tombs, magics binding the dead, and travels across the rivers of Lethe that run under the city.

The Brotherhood always keeps a number of soul brothers, martial warriors, and Black Guard on staff from Sijan to provide guidance and protect their property. Not all accept their ways. Their numbers service all of the south from this location.

A practitioner of elemental mastery, the position of Magnus has been held by many since the rise of the Exalts. They are entrusted with a powerful artifact providing a length of life and wealth of knowledge, collected by the past Magni unto the next.

Zhorne has held the position for some time, sifting through the knowledge of past masters. Tossing aside convention, he enjoys the touch of magic and revels in what he may yet learn! All restricted tomes and locked chambers are available to all seeking knowledge. He teaches within the Hall of Resonance, a home built around a bit of ruined garden and water sculpture.

Those that venerate the elements are ever welcome. And unlike previous scholars, this one enjoys his revelry and adventures.

Herbalism to refined drugs for pleasure, the Apothecarium of Ransham leads in herbal remedies and fine treats. Many seek their treatments for illness and wellness. They have books of tinctures and medicinals, with small gardens of delicate roots, herbs, and other sorts of natural life to provide cleansing and healing. This healing is affordable, provided in charity.

They earn jade through the more pleasurable crafts of opiates, weeds to smoke, sands to snort, and various other concoctions to awaken the mind and senses. Those that pass tests can learn with the herbalists. Any are welcome to heal and tend the sick.