Creation has a series of seasons based around the elemental poles within the world: water, fire, earth, wood. The calendar is simplified with an interruption of Calibration to mark the end and beginning of a year.

Do not attempt to use natural laws for weather and seasons in Exalted. All seasons are governed by the Celestial Bureaucracy, not science. The world has brutal winters, an extremely long summer, and a tiny bit of autumn. This is by design or decree.

The calendar years begins in the closest thing Creation has to autumn in the months of Air, then plummets into deepest winter. The weather climbs out of winter into a long growing season consisting of Earth, Wood and the early part of Fire, then it becomes the hottest summer heat followed by plummeting drastically into the month of Air again.

This means that Creation has two wet times, both of them bracketing winter – once when the temperature plummets from midsummer heat through the early months of autumn towards the midwinter freeze, and once more when climbing out of that freeze.

You will notice the names are literally the Ascending, Resplendent, and Descending seasons or elements. 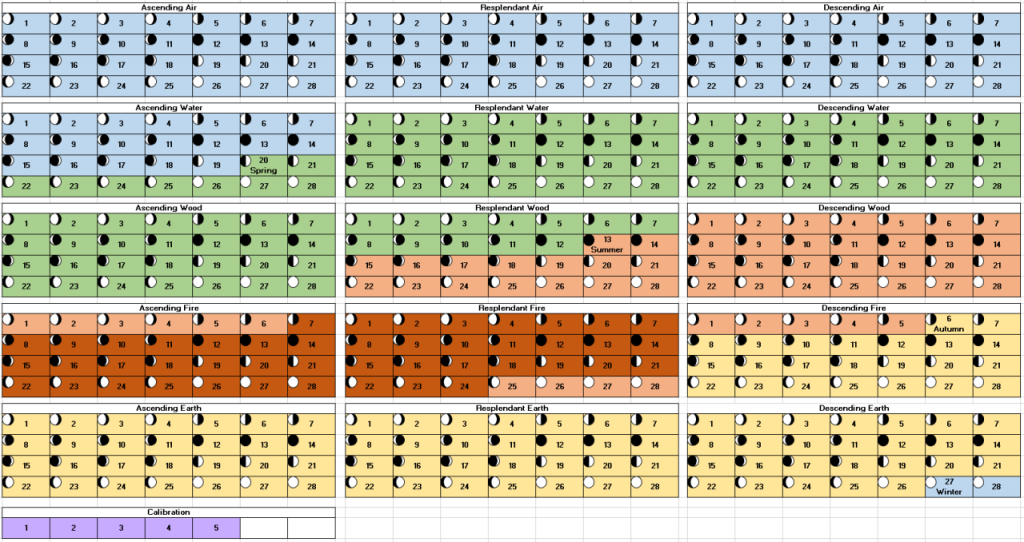 Why is autumn so short?​

This is because the Autumn Division of the Bureau of Seasons is exceptionally lazy, and the autumnal elementals of the Court of Seasons have a propensity to have very large and expensive parties. The season was thus shortened for productivity and budget considerations. At least, that is word around Yu’shan.

Five Days Darkness wished to have a single day his own in the great heavenly calendar. Alas, his offers and requests remained out of reach or simply ignored. A few voices provided guidance and a plan to simply enter Yu'shan and take what days he wanted. Rather than a single day, darkness claimed five.

The god is feared and hated, earning the name Five Days Darkness. DUring these five days and nights, the bounds of the underworld open and heaven's sway weakens. First and second circle demons enter Creation, practitioners can summon third circle demons, light fades as darkness consumes the world.

Many of the worst calamities have befallen the world during Calibration including Contagion and loss of the Scarlet Empress.

The official timeline is tracked here. The First Age was the awakening of Creation, rise of Yu’shan, the awakening exalts, and war. Such bitter warfare.

It ended with during the Usurpation and Shogunate era and the Great Contagion, a devastating illness that wiped out 50-75% of all populations.

We are within the Second Age. RY 768 is the year, Year of the Shogunate 1468, and Elder Reckoning 5317. A timeline for our campaign will be added.