Sadim’ma ahlas! Ah, no other city and nation has such fine markets! The Guild and Dragon-Blooded thrive upon what trade they complete here, for they must always come to us.

The single great river that flows down from the hills to the sea, the Tamas River is named for Tamas Khan, who is said to have fought the god of this river, and when he won, he chose as his victory prize the right to have the river bear his name, rather than the god’s.

A channel of the river cuts through part of the city, lined in stone and spirits to keep is clean and bright, providing a keep method of crops to travel into the city for sale. A bustling market sprang into life along the river banks, with food sellers floating down the water, and vendors in stalls on the stonework.

As part of the Old City, a grand market opens to the finer luxuries. The bazaar rounds with numerous buildings connected throughout the centuries, ranging from three to six floors tall. Wide swaths of silks and cotton cover the central open air areas to protect against heat. Palm trees and small gardens bring greenery and respite to the throngs of merchants and visitors.

These markets specialize in luxury items, rare imports, spices, silks, fine sculpture and art, and much more. A bulk of the sold items come from artisans in the city, with storefronts for imports of caravans and ships. The buildings with multiple floors tend to have apartments for rent with lavish gardens for those staying in the city or needing a private location for sales.

The bazaar stretches quite a length of blocks with expanding storefronts connected along the streets. A smattering of restaurants, taverns, and chocha houses offer respite during business or to secure deals. A private brothel space gives finer lovers in the trade a place to meet the affluent.

The original offices for the Guild are also housed in this district, with residences for their assemblies and guests. They have expanded to a new larger keep in the River Market. The Dragon-Blooded also have a temple and house for their affairs, guarded and held by House Peleps. 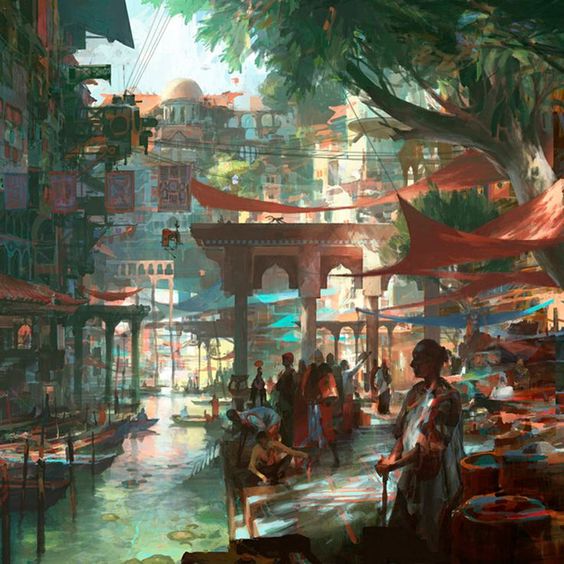 A newer market in the city, this market trails for miles along a man-made set of canals off of the Tamas River. House boats provide moving homes to enjoy a simpler, nomadic lifestyle on the waters. Cooks float in specialized boats to cook and deliver soups and quick meals from woks. Produce and meats are delivered by greengrocers to street vendors and smaller eateries. A few shamans provide spiritual guidance, sometimes offering herbal remedies and medical care.

Strips of small shops ahve grown in some areas to multiple floors with workers typically living above their businesses. 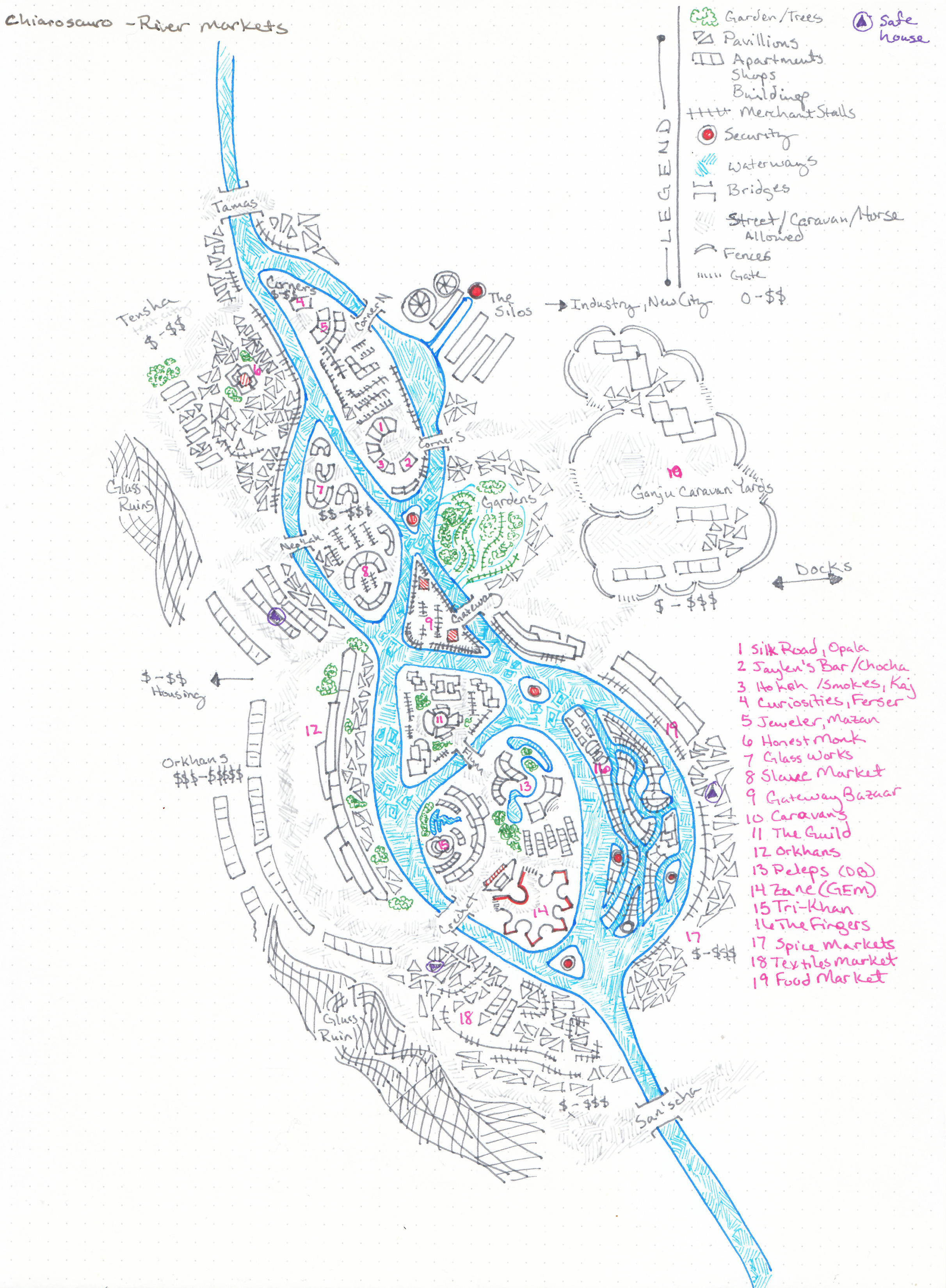 It is most often called the Under Market, and it has been in continuous operation for more than 4,000 years. During the Contagion, the Undermarket sold stolen (or fake) medicines; in the Fair Folk invasion, a few audacious merchants sold hiding places in nearby tunnels. After the old city’s cataclysmic end, the Undermarket was soon back in business selling food and dwindling supplies of First Age goods to the survivors.

Access to this is available through a sewer grate near the Hall of Resonance (temple of elements).

The Paper Wright - run by Marcus, a tavern converted into a bookstore kept with mathematical logic and care to track and store ancient to new writings:

The Juicer - run by Marge (human) and Drexxie (nickname for a wyld tainted human), a rather sad lean-to building smelling of green, vild things, sweetness, and death. An old side with odd fungi growing on it marks the destination. There are a couple windows hard to see through the grime. A back door provides access to a back room and counter. The main chamber has two walkways with heavilt cluttered shelves on both sides leading to a back counter.

Mustang Sallies - run by Sally a centaur, a stable in the depths with all manner of odd mounts and gear:

Findler's Finds - Findler a down and out accountant runs this shop. It's more of a shack with various odds and ends shoved inside on make-shift shelves:

Mothers - run by Mother (a different woman, based on a brooch they wear) runs this outfit in the market: 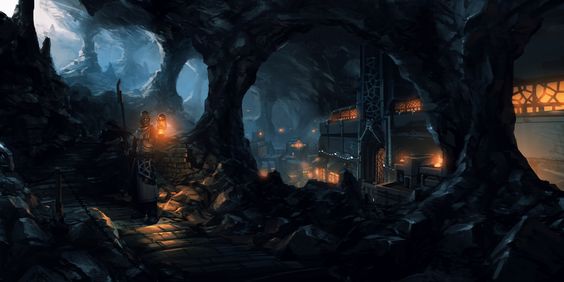 Heavily funded by criminal groups and a host of ghosts, a thriving black market lies within a shadowland. Ghosts here are a mix of dead within the last few centuries and much older. Recent centuries, most ghosts are bound in their tombs or aided beyond through a mix of preparation rituals, dusts, and the aid of Grandmother Bright and the Sijan Brotherhood.

This market trades in all manner of fetishes, items from ruins, particular assassinations, and knowledge. Scholarship of Chiaroscuro, the ruins, and all manner of spirit and dead are a particular commodity in the parade.

A deep path leading from the docks through a series of natural and man-made tunnels leads to a central meeting place for pirates, scum, and villany. Signs point the way for visitors to a small market, taverns and fight clubs, various services, and a dark lost avenue of broken homes call Kas Na Shii. For couragous souls, seeking the dark path leads to a broken manse ruled and run by demons, fiends, dark souls, and a odd creatures. They care only for drink, good games, and a protected place for dark deals. They have little ambition for ruling the world, just enjoying a drink and a fresh kill.

Manxi the bartender (and demon) enjoys making deals, trading gifts of boozed and rare blood for information, and planning entertainment for his fine guests.

Firewands are one-shot flame-throwers powered by firedust, a substance that can be found only deep in the Southern deserts. Made from finely turned brass with wooden or metal stocks, these weapons are the prized possessions of any soldiers lucky enough to own one. All firewands are breechloaders. The firedust must be loaded down the front of the barrel, and the weapon can hold only a single shot. Characters must use a miscellaneous action to reload the weapon after every shot. Also while readily available in the South, firedust can be expensive and difficult to find elsewhere. Firedust requires Resources 1 in the south. Many soldiers fit bayonets on the ends of their firewands and use them as crude spears once the weapon has been fired. 10 yards is the maxmim range of the flame jet, unless used with Charms.

Artifact firewands are a fine, rare item, also only found in the South.

The ruins of Chiaroscuro constitute an enormous supply of hard yet resilient glass…only only a small fraction of the glass comes in shares large enough to grind into swords. Glass holds a sharper edge than steel, worth every bit of jade or blood spent on these exceedingly rare weapons. Glass weapons have the same stats with a tag of Piercing and lower requirements for using, lighter than steel or bronze.

Luxuries of the Markets​

The city of Gem in the far south holds control over precious gemstones, carved from rock, siftware from sands, forced together through ancient forges and kilns, and many other pieces harvested from the reaches of the land of Fire. A secret unto themselves, the city brings forth shards and spires of raw gem and fantastic cuts entirely from their region. Few know the secrets of their craft, typically those that leave are found dead if at all.

In the nearby coasts, quarries, and canyons to Chiaroscuro, the semi-precious stone trade has a small following. Despite the stones being far inferior to Gem, many traders and craftsman fear collecting due to the obsessive nature of Gem families and merchants. Their reach is long and strong.