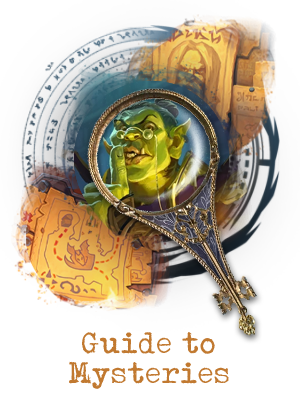 A guard stumbles across a criminal situation and needs to find the culprit. A spy uses a cover as a courier to receive and deliver vital messages for an employer or organization, intending to learn who is trading info, what secrets are trafficked. A farmer loses their flock of sheep seeing the muddy torn ground of wolves in chase of prey. A lady finds a party guest dead with a nasty lump on their head and a dagger protruding from their back in the mansion’s library.

The opportunities of investigations are vast and can make up a single scene for an event or build upon as the cornerstone of an entire event or campaign. They may spring up just from the interest of your attendees/players wanting to learn more about a situation, requiring you to come up with details on the fly. Or they may be the entry into a war situation or entering enemy territory for battles to rage in the next hour.

This guide provides information on how to build an investigation, key questions to answer before an event, and how to determine DC and results to quickly keep your event moving with dramatic and gritty detail.

This guide can be used for MMO-RPG in-game events, tabletop games, LARPs, and more! Examples include tabletop and MMO images. The rolling rules are for a d20 system, but you could easily convert this to a d10 World of Darkness table of successes and botches, d6 Shadowrun system, and so on.

What makes a good investigation?​

Before we dive into how to create an investigation, let’s touch on what makes a good scene.

Depending on your event type, RP or d20 with rolls, you don’t want an investigation to simply be: you find a dead body, roll/investigate sequence, it died by stabbing, and then throw information to hurry them along to what you care about more for an event. Events are journeys, and while you may adore combat or want them to rush to the end boss due to the cool mechanics you built, these situations can add flavor, depth, intrigue, perhaps even lovely foreshadowing to what will come.

These events do not need to be CSI: Warcraft or NCIS Waterdeep. Of course, you can go that route, and can be rich and fulfilling. But touching on those ideas and actions can deepen the story around your finale scene and give your diverse cast of players something meaningful to do.

What are the building blocks of incredible investigative storytelling? Let's get started!

The following are just a few building blocks of story and mechanics to consider when creating investigations.

Consider starting from the end and working backwards. To help plan your investigation, begin with the end and work backward. If a murder or theft, start with the culprit, method, item, etc. Work back to where and how it occurred, how it was committed, to plot out the path of clues and evidence.

Set the motivation, intent, and goal of the crime/scene/situation being investigated. Knowing these key pieces is helpful, and gives you a specific set of goalposts on the journey. Players can start out right then veer off into weird tangents and angles getting lost. With these goals in mind, you can lead them back and keep them moving forward. Examples to come as we build an investigation.

It’s all about the details. Every piece of evidence can have a backstory like any character. Think about what the evidence looks like, how the scene is laid out, signs of movement around the area (could indicate multiple people there), signs of struggle, signs of a cleaned up space, something out of order, something missing (dust rings), something added. Details give you so many pieces of information you can provide based on areas players search, multiple rolls from failures to critical successes. Write up tons of details. You can copy and paste these for all to see, in whispers to players, as hints of places or things to investigate.

The party finds a body with a blade stabbed in the back. How do we add details?

For the area, maybe there are toppled furniture indicating a struggle. Perhaps drawers to a desk are ripped open, papers everywhere, contents tossed indicating a search or theft in progress…but who searched? That could lead to intrigue and additional searches.

Provide multiple clues and paths to solve the mystery. Players may not find all of your clues or determine what to do with them. Placing clues in their path, reinforcing the direct, can help if they miss steps. Allow them to go back and check the scene if they realize they missed something or need to verify anything.

Determine multiple outcomes. Sometimes the best investigations are not 1 + 1 = 2. Stabbing + Theft = Thief did it. Just like the movie Clue, having multiple possible endings give you a chance to shift the tale, highlight key details that match the event’s scenes. And sometimes, Players have better ideas! Their leaps in logic might give you new ideas. Don’t be afraid to use them, leverage the paths their thoughts take. Sometimes those small changes can give players investment, that they figured it out or were right. It’s a great feeling for you and the group.

Also having multiple outcomes gives you the power of continuity! What if they only figured out 3 of 5 important pieces of the puzzle and the event comes to a close. This can lead to foreshadowing and further investigations in the next event or come up much later in other stories you craft. It may also lead to further role play as some players want to find those endings, drawing them into your webs of plot and tension.

Consider the skills and mechanics of finding and judging details. Story and role play are incredible to a scene and event, but mechanics can destroy the hard work you put in. Take the time to write out your DC or role play checks for finding details. Write out responses or results for those DCs. Also consider giving something special for critical fails and successes.

You can find a ton of incredible sources for inspiration. Here are just a few:

The following exercise will guide you through creating investigations for your events and campaigns. As we go, we will create two types of investigations as examples: dead body in a library (yay Clue references) and scouting party in the woods.

See How to Run Events & Campaigns for information and the following tips for investigations:

Determine what the investigation is. This could be a couple sentences, which gives you something fantastic to give players when starting the event. Optional details could be title, NPCs, etc. Just don’t overwhelm yourself with details yet.

When you have a scene coming up that may incur investigations, give yourself key information to fall back on.

This is the difficult (DC) required on a roll or roleplay to complete a task or get info. You can set a DC for both quite easily and effectively, just to give context of finding or missing things. Consider awarding not only successes but failures, these could be painful finds, breaking evidence by finding it, or discovering incorrect details to increase tension or misdirect.

For roleplayed freeform difficulties, you do not judge a roll result but keep a keen watch on position, path, described focus, and actions. For investigations, use the set locations to have players divide up and search.

Read through their text and provide information based on their attention to detail:

Example for a roleplay investigation of the Forest Trail: 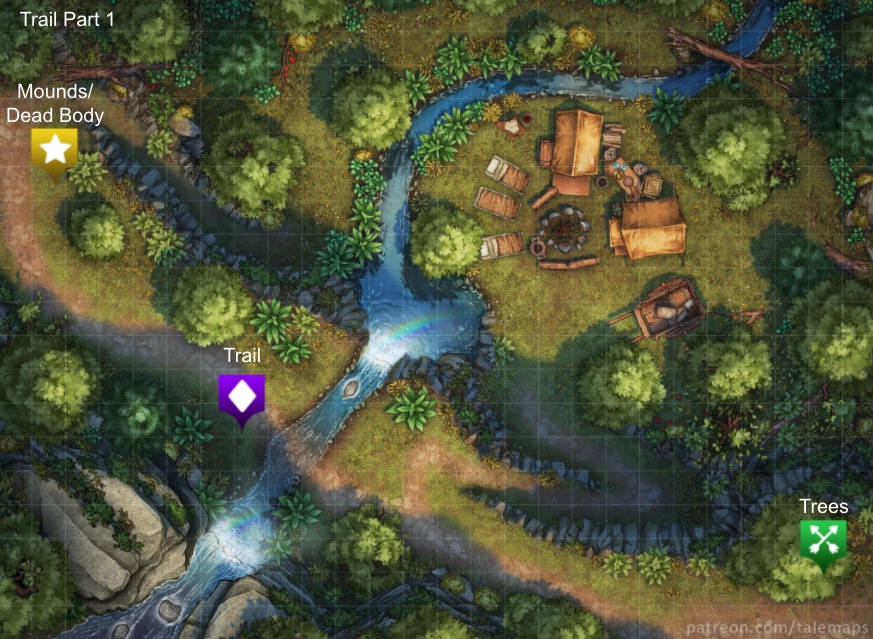 These games you roll to get a result. Usually 1-20 or d20 die with 1 being a critical failure and 20 a critical success. If you use custom game rules for MMOs or tabletop systems, bonuses may be added on rolls to go beyond a 20 or to reroll. Also what they roll differs for these situations.

For all of these systems, you have control to set the DC and what players learn. Here are recommendations with examples from the Death of Lord Ferris:

I strongly recommend prewriting a few things that may be lengthy. This cuts down on waiting for responses and keeps the event moving forward. Here are examples:

Connect your content with the physical location. Add raid markers per area they can investigate. This helps you track what players are checking, connecting to your DC rolls and descriptions. To make your life easier, take screenshots and create images plotting your raid markers. If you don’t have a chance to set them with another player, use screenshots and Google Drawing. Here is an example: 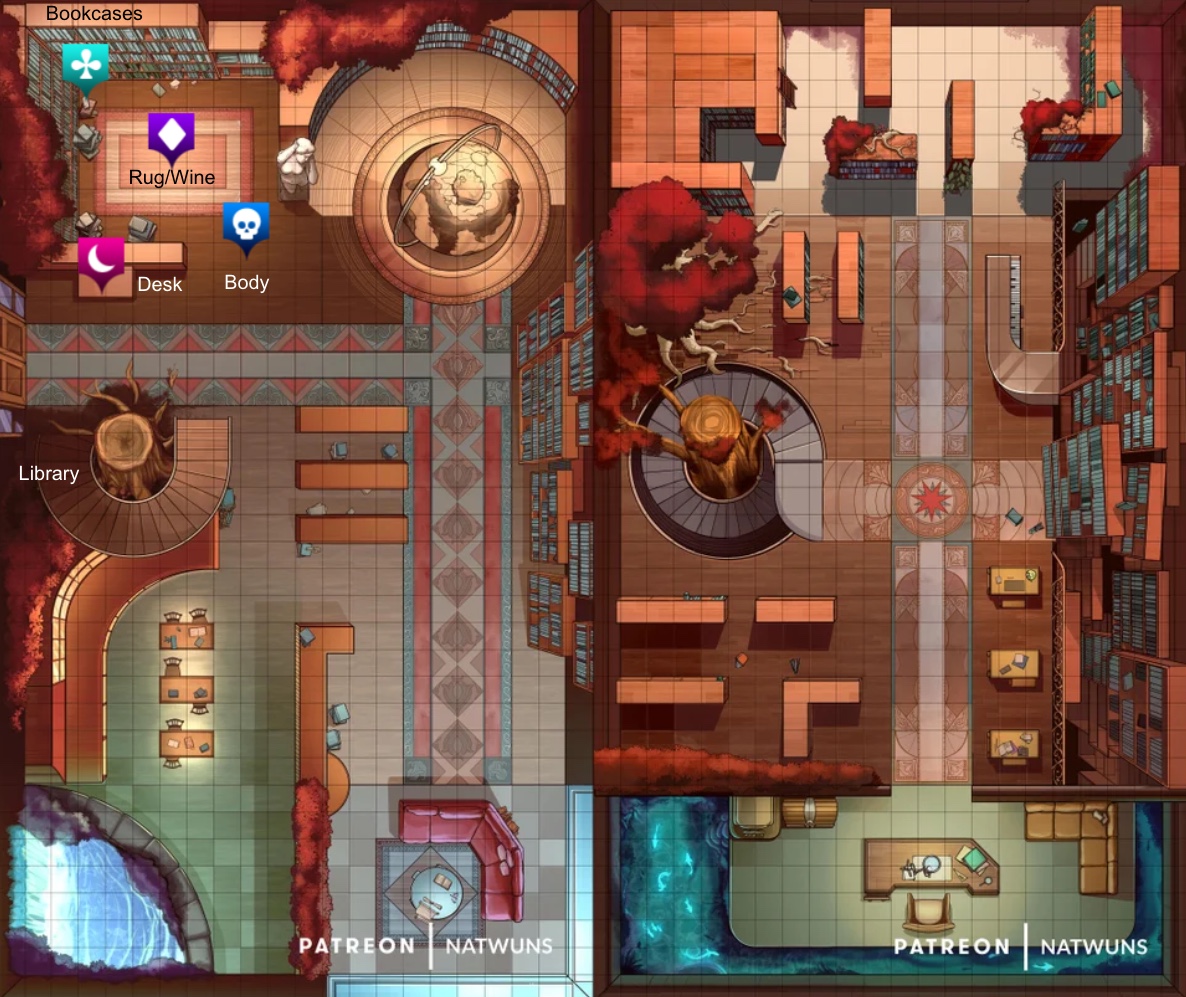 Much like a battle, these events will have a beginning and finale. Investigations may have multiple scenes and locations, one leading to the next. You can follow these examples for each transition, giving players more to investigate and connect until they reach the final encounter.

Connect your clues when moving scenes. Players will use the clues to build their case and seek answers. Give them NPCs with information if asked. Consider giving studied results by magic, alchemy, battle knowledge, history, and other knowledges and skills.

Consider failures and misdirection clues to false accusations but new solutions. Perhaps some of the clues learned and investigated that were incurred due to a critical failure cause incorrect assumptions. This can add depth or force the hand of the real culprit, turning a negative into a positive.

You have created a great investigation. Have fun, tweak as you need, build your events one to the next for a grand campaign. You can use investigations in battles, stealth missions, scouting parties, and so much more!