This guide walks through creating vehicle tokens. We use these tokens for Discord-based battles in Warcraft Conquest. Typically there are a few types: squads of character models, beasts, and vehicles.

You can install tools locally and use online websites to collect models for vehicle:

Want to learn how to export and work on models in 3D? Blender is a great tool to get started. You may need a graphics program to edit texture skins like Photoshop. And some guides!

Figuring out the vehicles you want to make requires a little thinking and inspiration. Here are some great ideas!

When planning your token, start putting together lists or files:

If you have the ability to use 3D programs, you can download and use the models and textures. These guides focus on image software like Photoshop and Gimp.

When capturing images and models, consider the angle. Isometric is best, which is pointed to the side, a bit top down. You can download an isometric grid and lay it over your files with a multiply layer setting. This lets you see through to only the lines.

Here's an example of taking a ship screenshot from WoWTools in an isometric angle. The grid was added in Photoshop to help see the angle. Top down, the front pointing not quite sideways, giving a view of the ship and all the great details.

When collecting pieces of other models and textures to add into the look, consider flipping and turning the items up and down, on its side, close up and far away. So many items and models can work, from armor pieces to buildings.

Here's an example of models captured and the final ship image for a Suramar magical warship, mixing a simple ship expanded with towers and a magical shield as an engine/sail. 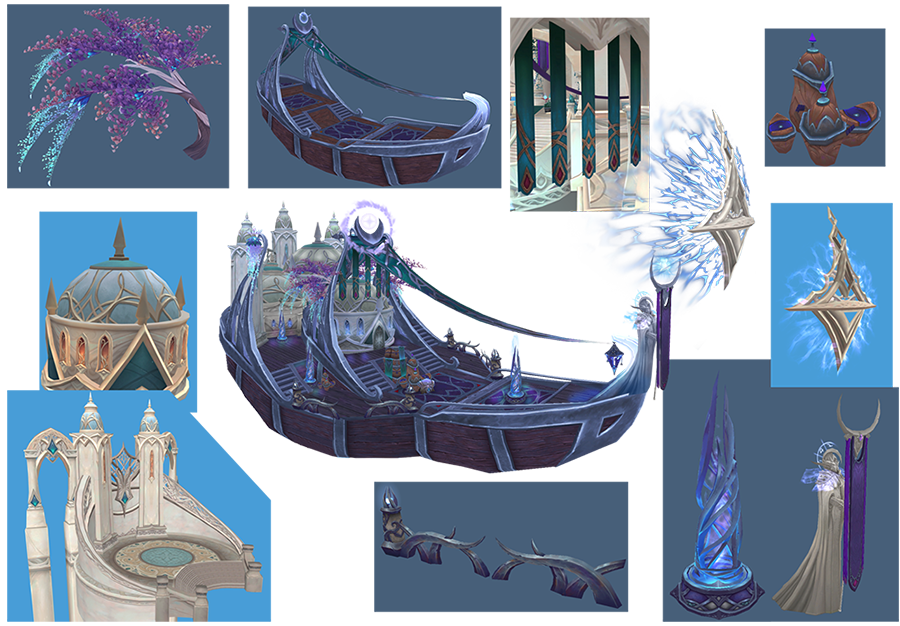